After a very successful first round of meetings with the various professional bodies and institutions of the Pakistan building industry in April 2014; the efforts of formulation of Pakistan specific Green Building and Infrastructure Development Guidelines are now taking shape.

The MOU was signed on an event hosted by Pakistan Green Building Council and the Institute of Architects Pakistan.Professionals from the Infrastructure planning &development,building design and construction sectors were present at the event along with a building industry leaders.

This was a historic moment signifying the beginning of a new era for all the professional bodies who will collaborate to promote green buildings and carbon emissions reductions in the building sector, including support for each other’s green building conferences and joint research and education on a series of issues of mutual interest.

Pakistan Green Building Council was established just a year ago, but has since quickly became an unstoppable driving force in the green building industry of Pakistan, partially due to the very obvious reason of Pakistan’s population &economic growth and urbanization which make it’s building market industryan attractive one in the region, with millions of square foot of the existing building stock along with million of square foot of new buildings each year. The associated energy consumption and carbon emissions in the building sector are expected to soar, which makes green building not an option but the only choice.

The WorldGBC Asia Pacific Leadership in Green Building Awards showcase and celebrate the achievements of businesses and innovators in the region which are leading the way on sustainability in buildings.

The Awards are divided into 3 categories:

The awards are open to companies and green building projects of all sizes across the region. Nominations must be through recognized Green Building Councils in Asia Pacific countries.

Why are the Awards significant?

Why should businesses or projects enter?

Please contact us if you are interested in applying for any one of these three award categories:

There is a nominal administrative fee of US$200 per nomination  (except for Women in Green Building Leadership nominations which are US$100), paid through Pakistan Green Building Council. For further information on the Awards, visit http://www.worldgbc.org/asia-pacific-regional-network-awards .

Please Submit your forms and for questions regarding the awards,

Social media is a key channel through which GBCs can communicate the Awards to their members to encourage nominations, and to the wider industry and public. We have created the dedicated hashtag #APNawards2020 for use on Twitter and Facebook.

When posting on social media, we would encourage GBCs to link to either a dedicated web page for the Awards on their own websites, or to the WorldGBC Awards webpage ( http://www.worldgbc.org/asia-pacific-regional-network-awards ), which we have shortened using bitly here: http://bit.ly/2CY6eMv 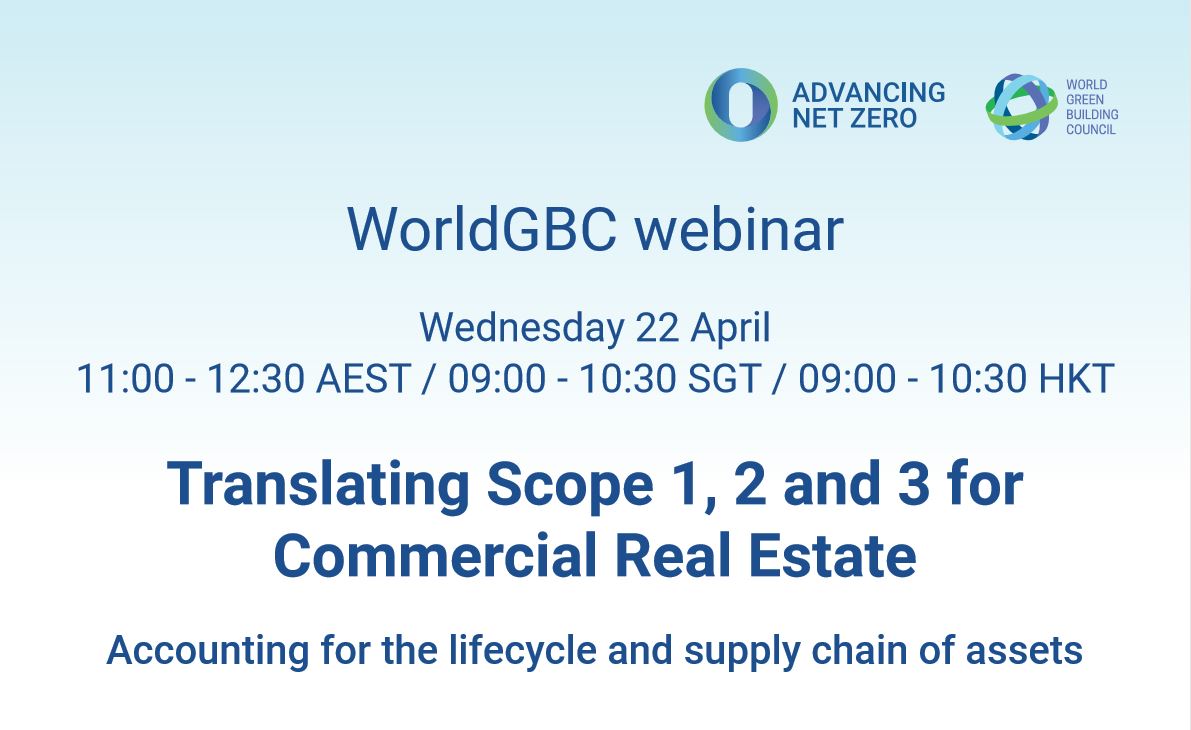 WorldGBC along with some of Asia Pacific’s leading real estate companies will be hosting a webinar on Wednesday 22 April to translate what scope 1, 2 and 3 means for the commercial real estate sector. With limited guidance and understanding currently, this webinar will provide insights on:

• the overall emissions impact of the different scopes